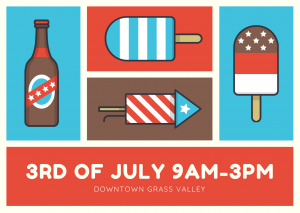 Saturday, the 3rd of July will be a day downtown for fun and families
11am-3pm
Details:
Sunday 4th of July motorized parade 9am-10am through Grass Valley and Mill  St
Route/Details
www.downtowngrassvalley.com
www.grassvalleychamber.com
www.cityofgrassvalley.com 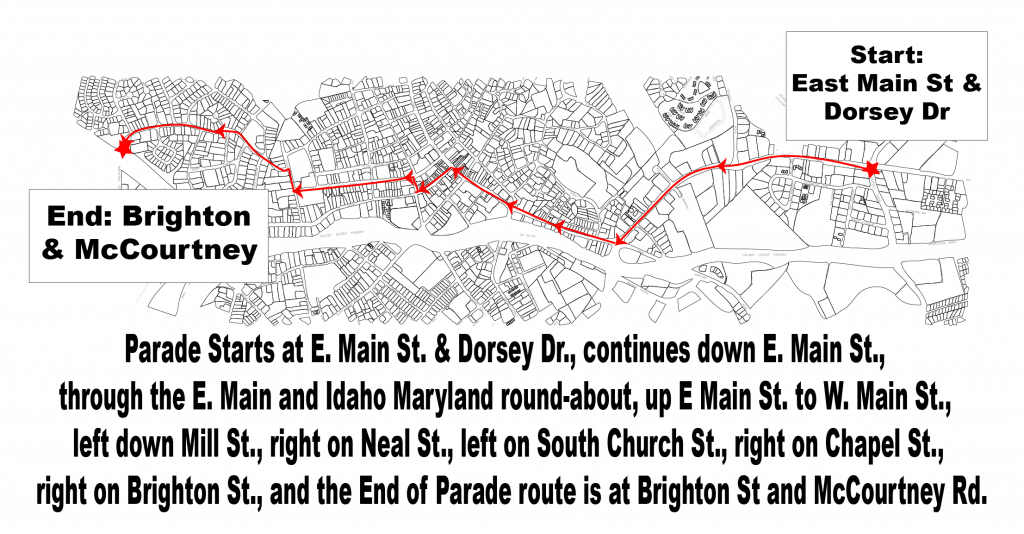 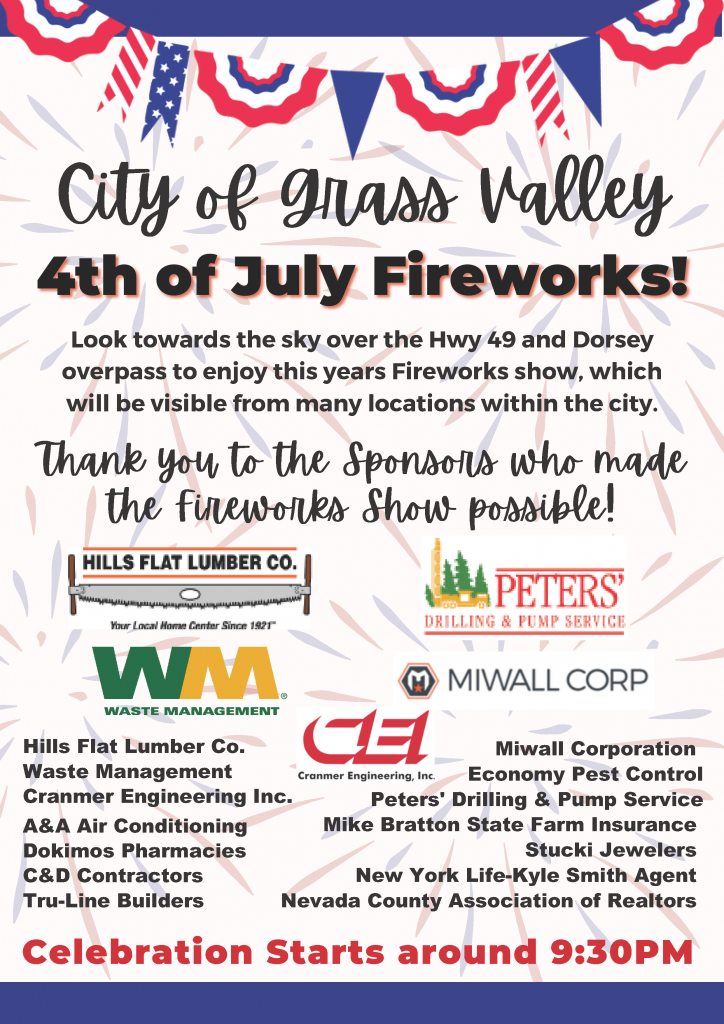 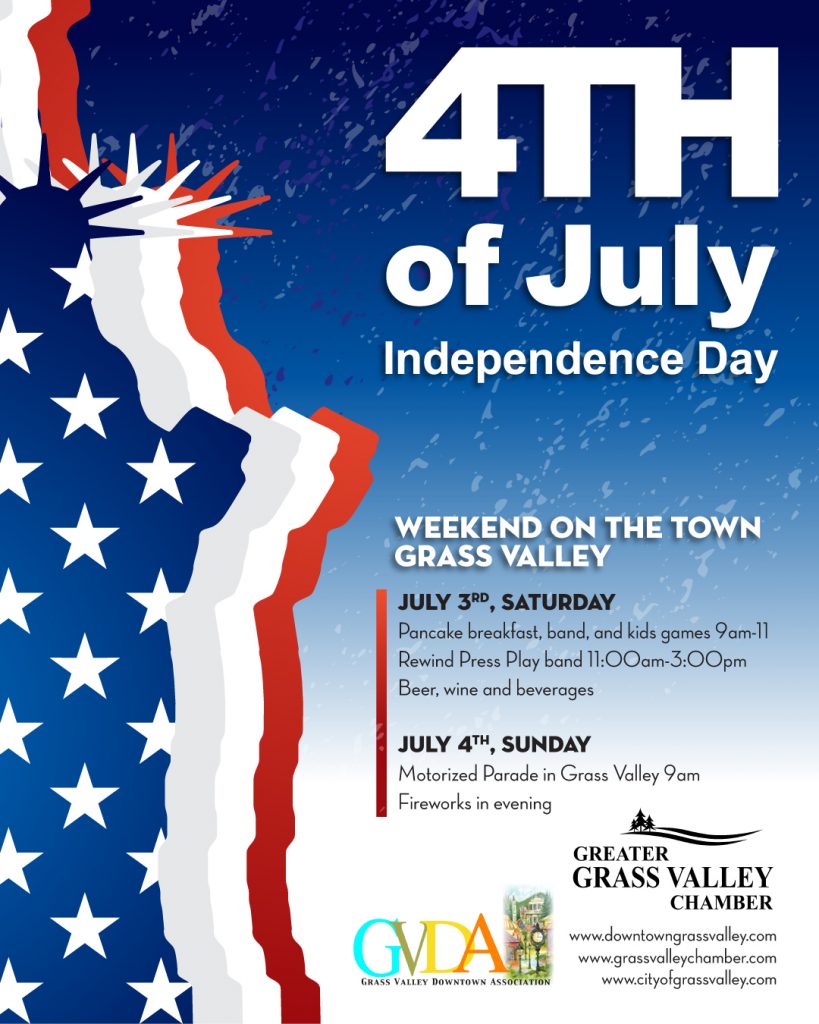 Music on the 3rd of July

With the announcement that June 15th will herald the end of the Tier System, and a full reopening of California’s economy, our 4th of July Committee was excited that there was a possibility of holding the 4th of July Independence Day Celebration and Fireworks Spectacular at the Nevada County Fairgrounds. However, as we investigated protocol for gathering, we learned that full reopening does not mean the full return to pre-COVID life. Without firm mass gathering guidelines and event protocol in place at that time, the 4th of July Committee opted out of the Fairgrounds event this year, choosing to err on the side of health and safety.

What began with the 1902 4th of July, Grass Valley and Nevada City ushered in an era of cooperation and support between our communities that has endured beyond just special events for more than a century, and for that we owe a debt of gratitude to community leaders who agreed to alternate the annual patriotic parade and began working together for the good of both towns.  But not before spirited competitions were waged by both communities!

Today, those spirited competitions are behind us, and we honor the legacy of working together for the benefit of the greater community. Next year, it will be Nevada City’s turn — a policy in effect since 1902 for alternating Independence Day parades — and by then, we hope, all vestiges of COVID 19 will be behind us.

The 4th of July celebration IS HAPPENING in Grass Valley and here is what’s being planned.

For 2021, the Greater Grass Valley Chamber and the Grass Valley Downtown Association with collaborative support from the City of Grass Valley, are partnering to host our beloved small-town Parade. The 2021 Parade Theme is A Salute to Our Nevada County Heroes!

An All-Vehicle Parade format is being observed again this year and Parade participation is open to the public ─ each and every citizen, business, and nonprofit organization is a Nevada County Hero! and all floats must qualify to observe the speed limit and be eligible to be on the “highway.”

The Parade will begin at 9:00 a.m. at the corner of East Main Street and Dorsey Drive, wend its way to downtown Grass Valley, with the traditional passage down Mill Street, past the Announcer’s (Thank you Jay Cooper and Carol Scofield!) and Parade Judge’s stands (thank you Ed Scofield, Julia Stidham and Steve Sanchez!) and will follow the traditional Grass Valley Parade Route, ending at the Fairgrounds. The extended parade allows for community viewing along the route.

FIREWORKS! The Fireworks Spectacular put on by Pyro Spectaculars, will be organized by the City of Grass Valley and launched from the Dorsey Marketplace site, with excellent viewing for folks in both towns.

In lieu of the event at the Nevada County Fairgrounds, the reimagined Independence Day event will be a two-day celebration. July 3rd will feature family-friendly festivities on Mill and Main streets, starting with a pancake breakfast and a children’s carnival from 9:00 a.m. until 11:00 a.m. — followed by the music of Rewind Press Play and the merriment you’ve come to expect in downtown Grass Valley on “The T.” Festivities will begin at 11:00 a.m. and end around 3:00 p.m.  It promises to be a fun-filled day for the entire family, so be sure to come downtown for a few hours! 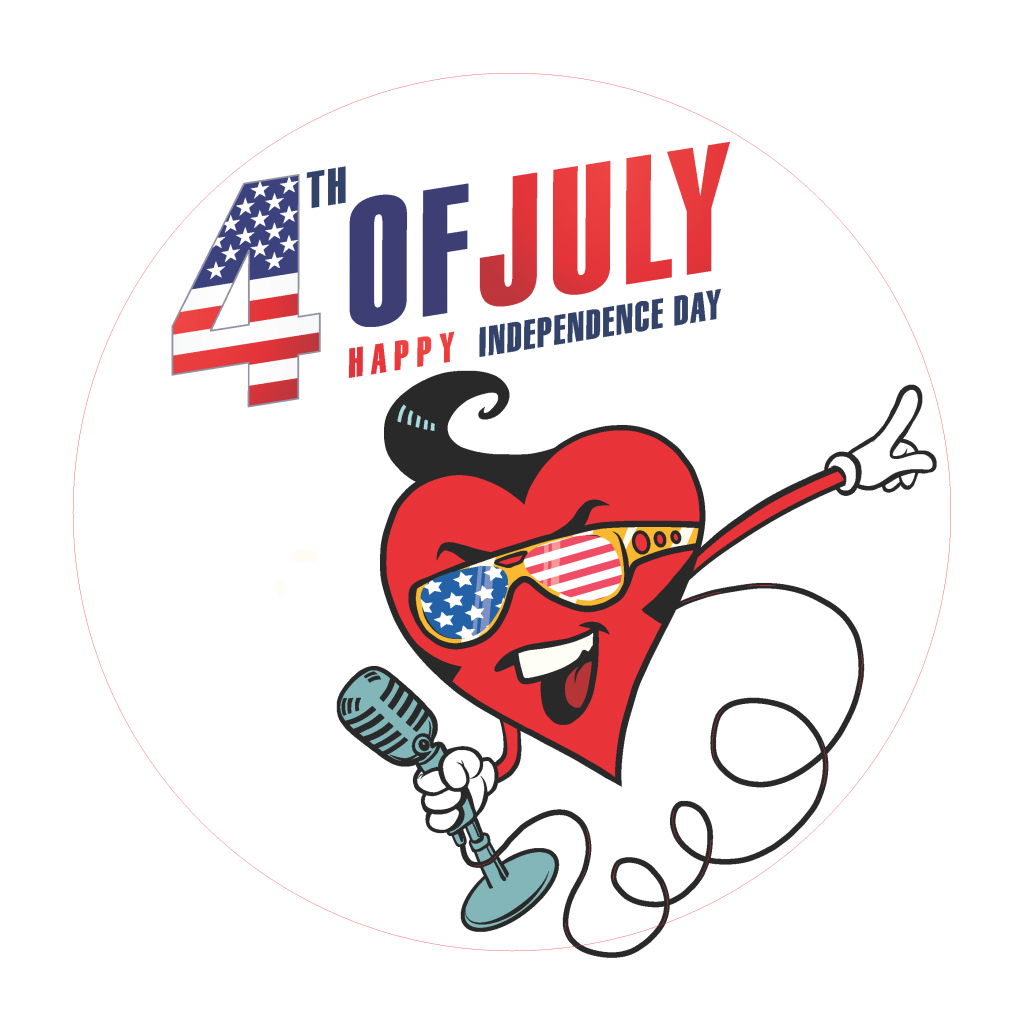 Below are two links you need to see the volunteer opportunities and descriptions for downtown Grass Valley events, and how many positions there are.
You will need to register with Volunteer Hubb to sign up.   If you don’t want to register, email me and let me know which shift(s) and dates you want.
We appreciate you!!!
—
Thursday Night Markets 2021: June 24, July 1, July 8, July 15, July 22, July 29
https://volunteerhub.connectingpoint.org/search?shareId=049ed4a7fd1b45a8ae9493b0ab09aadb

Third of July day downtown
https://volunteerhub.connectingpoint.org/search?shareId=8fa01860902744d684ce9f888afad660
If you can’t volunteer, do you know someone who would?  Please share.
Join us on Downtown Grass Valley Volunteers at https://www.facebook.com/groups/232544790659336